Furries: An Inside Look

Furries – An Inside Look from Curt Pehrson on Vimeo.

Furries are a subculture fandom interested in anthropomorphized animals. Furries often choose animal alter egos that best reflect their own personality traits or desired personality traits. Like Bronies or Juggalos, Furries are a community of people that are often gawked at. Although they have been around since the 1980s, Furries still get a bad rap in popular media. In the Vimeo documentary Furries – An Inside Look, filmmaker Curt Pehrson goes behind the scenes of the 2010 Midwest Furfest and attempts to show a side of the Furry fandom that popular media often ignore. While their hobbies and interests may seem odd to the average viewer, the furries live seemingly normal lives outside of the numerous furry conventions that exist whether it’s at their day jobs, with their families, or at home.

Many of those interviewed in the documentary – all of which were men – shared that what drew them to the furry community was a love for things like cute animals, Japanese artwork, and even The Lion King. They expressed excitement sharing the story of when they discovered this community of likeminded people online who shared a similar type of affinity for animals that they themselves had. According to Ryan Broderick, “many furries say they experienced a ‘coming out’ process. It begins as a childhood love of cartoons, especially ones that feature talking animals. After some googling, many young furries describe an ‘a ha! moment’ after stumbling across a piece of furry fan art or a furry message board.” Furries were able to grow and connect because the Internet provided a safe space for them to share these unique interests. 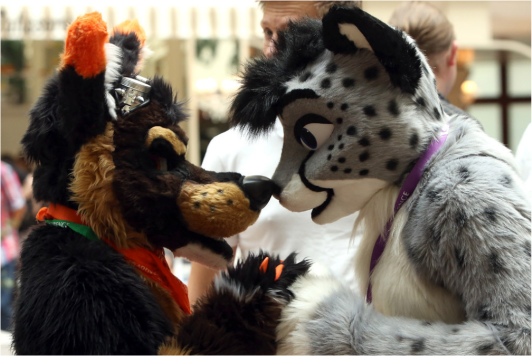 One furry noted that over time the furry fandom for him “became less about furry and more about the culture.” The connections formed in the group allow these people who often felt somewhat isolated from their day to day lives to find meaningful friendships that aren’t based on proximity but on similar interests. Among furries, it appears that everyone knows everyone else. A few furries commented on the video sharing that that while they were not at the 2010 Midwest Furfest, they had recognized some of the furries that were featured in the documentary. This ability to connect across borders is encouraging and I feel is definitely a positive aspect of online communities. It provides a space for those who feel like they don’t belong to connect with each other and form a community where they can all feel welcome and accepted.

The idea of furries as a family was a recurring theme throughout the documentary. Many furries have experienced feelings of inadequacy and self-consciousness in their lives and therefore being a furry offers an escape from these feelings. The furry fandom has become a space for these individuals to express themselves and form friendships without fear of judgment.

While some people have completely detached their furry life from their typical day-to-day world, others have integrated the furry lifestyle into their lives increasingly over the years that they’ve been a part of the fandom. The community is supportive no matter which path people decide to choose. Those that feel closer to their furry family than their biological family have made less distinction between these two worlds. Similar to the Juggalos using “The Gathering” as an escape while living a normal life outside of this yearly festival, those that see being a furry as a hobby look at Furfest, Anthrocon and other furry conventions as an escape from the mundane.

Like the other fandoms we’ve discussed in class, Furries are open when it comes to sexuality. Popular media have often portrayed furries as a sex-crazed group of people and this sexuality became a central criticism of the group as a whole. Dr. Samuel “Uncle Kage” Conway, the chairman of Anthrocon, notes that while this sexual behavior does occur, it is a small minority of furries who participate. The majority of furries feel that the actions of the few have caused a stereotyping of the furries as a whole. The frustration comes in when reporters show up and their central focus becomes this sexual behavior that one a small number of people are actually participating in and present that as what happens at Furfest as a whole.

Although furries have been around for 30 plus years, it was not until I watched Pehrson’s documentary that I learned about this unique subculture of society. This low-budget, amateur documentary was an academic pursuit by Pehrson for a college class. While the documentary contained a number of informative interviews with furries, it lacked footage that could have provided an in-depth look at how the community interacts with one another in general and more specifically, at the actual convention. My initial thought was that this was left out on purpose to show a more “normal” side to the furry culture outside of the animal costumes and other antics.

After reading some of the comments on the video to gain some more information about this culture and hear from potential critics and furries themselves I noticed Pehrson’s reply to a commenter who questioned if he was a furry himself:

“And the million dollar question that no one has asked so far: am I a furry? Yes, I have been for about eight years. I was introduces to it through friends who I stumbled upon through other channels, and to me it has proved to be a very positive community in which I have made numerous meaningful, lasting friendships. I’m not a fursuiter or a furry artist (unless documentaries count), and I don’t take it to a spiritual or therianthropic level, but I do believe the fandom consists of some of the most friendly and accepting people around, and those that I interviewed tend to agree!”

From Pehrson’s reply I concluded that there is an obvious bias and perspective he is trying to take to get the viewer to empathize with furries. It was a lot more difficult to gawk at this community when they weren’t all suited up or engaging in crazy activities on screen. While I still didn’t necessarily empathize with this culture after the film, I do think Pehrson was successful in this portrayal but overall it left me very skeptical as if there was something that he was trying to hide.